Power of the Question

Have students write a journal entry about a time when he or she asked a poor question and describe the experience. Share several student examples.

Based on over 600 interviews for his first book, Sawatsky and his graduate students began to identify patterns in questions and identifying questions that didn’t work. After extensive patterning, seven question-asking sins emerged for Sawatsky.

Show PowerPoint (embedded in Sawatsky video between parts two and three). Ask students to illustrate one of the sins, using pictures and symbols. Post and have students guess which ones are illustrated.

You can watch the entire Sawatsky video here.

Show part three, Method in Action. Have the students analyze the questions Bunin uses and identify qualities of questions that he asks. Spend a few minutes asking students to critique Bunin’s interview.

Have students work in small groups to create a skit with five questions that incorporate Sawatsky’s tips. They could be themselves or choose to be famous people, being as creative as they wish. One person will be the subject/interviewee (i.e. is it Joe Jackson after son Michael’s death, Britney Spears after getting arrested, President Obama after getting elected, you after breaking curfew, etc.), and the other person will be the reporter/interviewer. After they prepare the questions and decide on the topic of the interview, have students share skits in class as time permits. 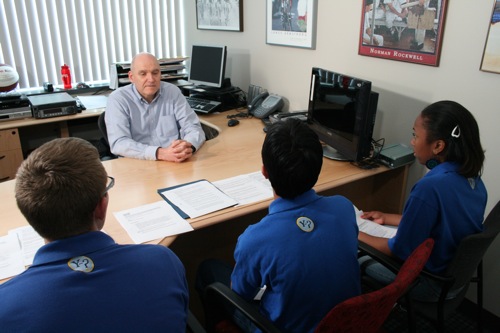